Clan Wars is a safe minigame located south of the Duel Arena in Al Kharid. The minigame was released on 19 June 2014. Clan Wars allows members of two opposing Friends Chat to engage in player-versus-player combat against one another. Players can teleport to the Clan Wars with a ring of dueling. Nonmembers can teleport there through simply the user interface with no items at all by clicking the quest icon, then the mini game icon, then the teleport button. Here, players can also find a free-for-all portal (white portal). This portal is used by players to practice or have fun in a PvP zone, or to restore drained stats and hitpoints upon exiting.

There is a bank and prayer altar here for players if needed. The unofficial Clan Wars world is World 302. The purple portal is often used by PvP clans to against one another or to fight against other clans. It is seldom used by casual fcs. Instead the FFA portal is more popular.

North of the bank, there is also a portal to Castle Wars.

Setting up a clan fight 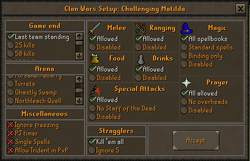 In addition to these maps, the classic map from RS3 was added sometime in November 2014.

In addition to the purple portal, there is also a free for all portal. Players will be able to recognise it by its white colour. Unlike the purple portal, there are no set teams or setting up fights between clans. Instead, it is a place where players can challenge each other 1 on 1, or in multi-combat zones without having to worry about losing their items. The free for all portal is also a popular place for players to afk train magic, especially in F2P. Two players wield armour which makes their attacks always miss, start attacking each other and they go afk. Since the fight never ends, and you get xp even if you miss, this is a decent way to train magic.

This portal is often used by players to restore drained stats (including Hitpoints, Prayer and Run energy) and cure poison, as entering the portal and exiting it (via itself or a teleport) will restore stats and cure venom and poison.