Does what too many people aren't interested in doing. 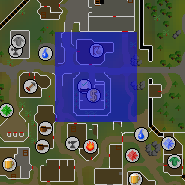 A cleaner is an NPC that can be found roaming the city of Varrock, most commonly found around its Western bank. Cleaners help to keep the city's bustling streets free of litter that is often cast aside by travelling adventurers and careless residents.

Cleaners were added along with the Varrock graphical update to help cope with the large number of ashes that often littered the streets of Varrock. Varrock's main streets are a popular area to train Firemaking amongst both free players and members alike, and as a result, are often crowded with the remains from players' fires. Cleaners help by walking along the lines of ashes and sweeping them up.

Cleaners, unlike most NPCs, cannot be spoken to, attacked, or interacted with by players in any way. They can only be examined.