North of the Fishing Guild, west of McGrubor's Wood 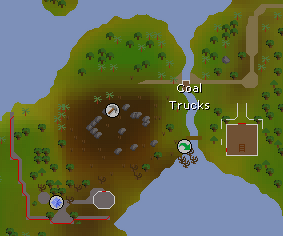 The Coal Trucks are located north of the Fishing Guild and west of McGrubor's Wood. At the coal truck mining area, there are 18 coal rocks and 2 carts. This is considered one of the most efficient places to mine coal. 120 coal can be stored in the carts if no Kandarin achievement diaries have been completed, though you can store 140, 280, or 308 pieces of coal in the trucks if the easy, medium, or hard diary is completed (respectively). In addition, the first 200 coal placed in the trucks are automatically transported to the player's bank if he or she has completed the elite Kandarin diary. An exploit currently exists in which a player can transport 27 additional coal if the trucks are filled up to one less than full, then an entire inventory of coal is placed in the cart.

Once the carts are full of coal, the coal may then be removed from any of the carts, but the most convenient location is a building with a mining symbol over it which is in the north-western part of Seers' Village. There is also a log balance (shortcut) just east of the coal trucks which can be used at level 20 Agility to cross over towards McGrubor's Wood. (Otherwise, you have to go around the Fishing Guild. You could also use a Camelot Teleport. If you are using the log bridge to get the coal to your bank you should have 30+ Agility even though 20 is required. You might want to run during trips because of the distance.

During runs you should try this:

Grab your best pickaxe and move from one area to the other in this order: MINE-STORAGE-BANK-STORAGE multiplied by how many trips you take to empty it, then head back to MINE and repeat. Clothing that gives a negative weight may be helpful here.

If you like superheating, the nearby anvil will put the coal to good use and providing a good way to smith. Or you can just sell it. While mining you should go on walk so you get run energy for running back to storage. You may want to grab a few energy potions or mint cakes.

It should also be noted that there are aggressive Giant bats amongst the coal, so mining here may not be suitable for players with a low combat level.

The mine contains the following rocks:

Retrieved from "https://oldschoolrunescape.fandom.com/wiki/Coal_Trucks?oldid=8688376"
Community content is available under CC-BY-SA unless otherwise noted.