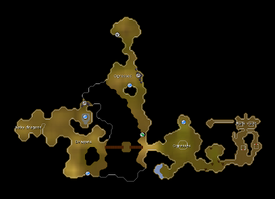 The Corsair Cove Dungeon is a large cave system underneath the southern part of Feldip Hills. It is mainly inhabited by ogresses, though the western caves are part of the Myths' Guild.

The eastern side of the dungeon is accessible to all players. It only contains Ogress Warriors, Ogress Shamans and a few Spiders.

To the east is the ogresses' bank vault, which serves as scenery. Francois, Arsen's brother, can be seen digging towards the vault, with the ogresses none the wiser.

To the north-west is a mining site, which requires completion of Dragon Slayer to access. Players can access the site from the dungeon north of the bridge, which requires level 15 in Agility to use. This site has four coal, two mithril and one adamantite rock.

The western side of the dungeon, which is the Myths' Guild basement, is only accessible to members who have completed Dragon Slayer II. This can be accessed either through the Mythic Statue in the centre of the Myths' Guild, or by passing the barriers being guarded by Ponts the Bridgemaster west of the ogresses.

Here players will find the Fountain of Uhld, which can be used to recharge skills necklaces, combat bracelets and amulets of glory, and a small mine containing 4 adamantite rocks and 2 runite rocks.

All chromatic dragons can be found here, in addition to 6 blue dragon scale spawns.

The southern exit leads to a small island south of the Guild, and contains the wrath altar, where players can craft wrath runes.