End of fourth level of Stronghold of Security

Life in the midst of death. 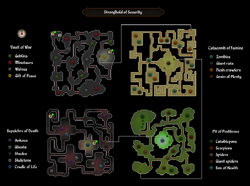 The Cradle of Life is a treasure chest found at the end of the fourth and final level of the Stronghold of Security. Once opened, the portal near the entrance can be used to reach the end of the level. When opened, the player will have the option to either receive Fancy boots or Fighting boots which have the same stats but are cosmetically different, as well as the ability to use the Stamp emote. Finally, as with the other levels, the player will have all hitpoints and prayer points recharged. Like the other treasures found on previous floors, the Cradle of Life contradicts the theme of the floor. A player can only open it once they have completed the 2 factor authentication system for their account.