A tall and imposing man who's more than familiar with boating. 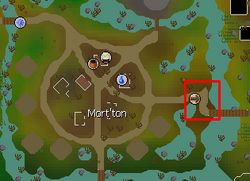 Cyreg Paddlehorn is the boatman and an associate of The Myreque who hid away from the vampyres in Morytania. The journey he provides is from an area in the centre of Mort Myre Swamp near The Hollows. From there, he will take the passenger to the town of Mort'ton via his Swamp Boaty for the small price of ten coins. With a ring of charos activated, a player can get a boatride to Mort'ton for free.

An interesting fact is that he is the only fully human NPC in Mort'ton (with the exception of when a player learns to cure afflicted members of the town during the Shades of Mort'ton quest). Another interesting point is that despite being fully human, the Loar Shades and afflicted have no interest in him.

At Mort'ton, he is located to the southeast, near the bridge that takes the player to the Barrows minigame. Another bridge in Mort'ton leads to Burgh de Rott, the hometown of Cyreg's organisation, the Myreque. Cyreg's boatride is used heavily during the quest In Search of the Myreque and is popular as a shortcut to the southern parts of Morytania, which will deduct much journey time and attacks from ghasts, leeches and vampyres.

Retrieved from "https://oldschoolrunescape.fandom.com/wiki/Cyreg_Paddlehorn?oldid=8692039"
Community content is available under CC-BY-SA unless otherwise noted.