He has a colourful personality. 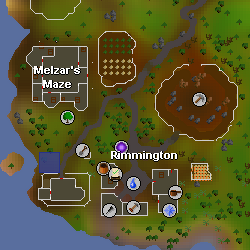 Da Vinci is one of the three henchmen who plays a role in the Biohazard quest where you use him to deliver the dangerous chemicals and virus sample to Varrock. During the quest, you need to give him the ethenea.

If you talk to him on a non-members' world, he would point out that it is a humiliation to stay in a world filled with non-members. After Biohazard is finished, he has no purpose whatsoever with your chatbox stating he isn't sufficiently moved to talk. He can be found in two locations: Rimmington and Varrock. In Rimmington, Da Vinci can be found pondering over his masterpiece outside the chemist's house west of the general store. While in Varrock, he can be found sipping a cold beer in the Dancing Donkey Inn. Da Vinci is always seen together with Hops and Chancy.

He is also featured in the 2018 Birthday event, where he seeks the player's help to complete a display set so that he can paint a picture of it.

Retrieved from "https://oldschoolrunescape.fandom.com/wiki/Da_Vinci?oldid=8691989"
Community content is available under CC-BY-SA unless otherwise noted.