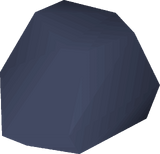 A daconia rock is a magical rock that has been hidden in the roots of the Grand Tree in order to poison it.

The Daconia rocks were created by Hazelmere - allegedly as a precaution in case the Grand Tree should grow out of control, and are the only thing that can kill it. Players discover his precaution has been subverted in The Grand Tree quest.

You find out about the rocks by talking to Hazelmere. You will not understand him, but eventually you will communicate. He will take your bark sample, and after examining it he will give you a message. When translated using the translation book it reads:

Retrieved from "https://oldschoolrunescape.fandom.com/wiki/Daconia_rock?oldid=8691979"
Community content is available under CC-BY-SA unless otherwise noted.