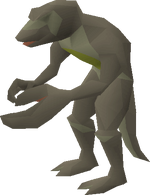 The Dagannoth Kings are a group of three dagannoths that live deep in the cave on Waterbirth Island. They are each level 303, and also represent the combat triangle. Each of them uses a different combat style, and is weak against the type that defeats them on the combat triangle, and immune to all others. Each King possesses his own unique ring drop, except for Rex who has two. The rings give the best bonuses for their respective styles in the ring slot. All three kings have the ability to drop the dragon axe. Each also drop dagannoth bones.

The journey to the Dagannoth Kings is undoubtedly the hardest part of the trip. There are a few methods to getting to Waterbirth Isle. If there is no mage able to perform the Lunar spell, Group Teleport to Waterbirth, then the team will need to travel by foot. Walking from Camelot, a lyre teleport, or Rellekka house teleport are all viable options. Other alternatives include using a Waterbirth Teleport portal in a POH, using the teleport of the Fremennik Sea Boots, or teleporting to Lunar Isle and walking from there (also possible through a teleport scroll)

From there, it is important to rest at several different points:

It is important in that last area to rest, and use it to restore Hitpoints and Prayer. Typically drinking three doses of a Saradomin brew and one dose of a Super restore and then any boosting potions are helpful. From there, everyone must follow the mage and pray Protect from Magic and run to the ladder at the bottom of the cavern.

There is a separate lair for people who are on a dagannoth slayer task; it can be accessed by right-clicking the Kings' ladder. You don't need a task to go into the Slayer lair; this way, it's possible to pick up your items after a death even if your task is completed. However, if you don't have a dagannoth task, you will not be able to attack the Dagannoth Kings.

There are two spots that allow you to check if there are any players in the Dagannoth Kings without entering. You can peek at the ladder, which is used to go down into the King's lair. Alternatively, you run a bit east of the Kings' ladder, jump over the root on the ground, and you will be in a small room. This room has a crack in the ground, which allows you to peek through. No NPCs can access you in this room, so you can use this room to hop around until you find a free world.

Retrieved from "https://oldschoolrunescape.fandom.com/wiki/Dagannoth_Kings?oldid=8689895"
Community content is available under CC-BY-SA unless otherwise noted.