A researcher from the Varrock Museum. 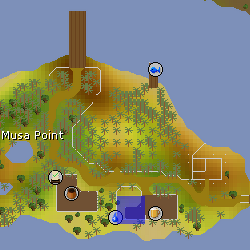 During Dragon Slayer II, he investigates the destruction of Crandor. He is located in the Karamja Wines, Spirits, and Beers pub on Musa Point, where he will give the player a brief summary of Dragon Slayer I. After spoken to, he will appear in Elvarg's den underneath Crandor.

He is ultimately killed by Galvek immediately after Zorgoth awakens the dragon.