The magical sword 'Silverlight', enchanted with the blood of Agrith-Naar. 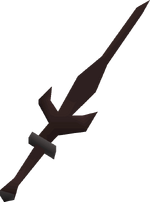 Darklight is a magic sword created from the sword Silverlight during the Shadow of the Storm quest. In that quest, Silverlight is transformed into Darklight after being dyed with black mushroom ink and then being used to destroy the demon Agrith-Naar, which coats it in ichor. In addition, being that it is still made of silver, it is effective against vampyres.

Both Silverlight and Darklight can be mounted on the wall of a Quest Hall in a player-owned house at 42 Construction.

If lost, Darklight can be repurchased from Sir Prysin in Varrock Palace for 1,000 coins.

Note: Darklight can only be replaced if all Silverlights are dropped.

Against non-demonic enemies, Darklight is a fairly weak weapon with bonuses equivalent to that of a steel longsword. When using Darklight to fight lesser, greater, black or abyssal demons, bloodvelds, or vampyres, the player's maximum hit is increased to approximately the same level as a dragon longsword; however, its accuracy remains the same.

The Darklight has a special attack, Weaken, which consumes 50% of the player's special attack energy and lowers the opponent's Strength, Attack, and Defence levels by 5% (10% for demons) of their max level. This special is only activated when the player hits accurately and multiple special attacks will stack.[1]

The Darklight can be upgraded into the Arclight by using three ancient shards on the Altar in the centre of the Catacombs of Kourend. Doing so further increases the effectiveness against demons and changes attack speed to 6. 75 Attack is required to wield the Arclight.