He's dressed all in green. 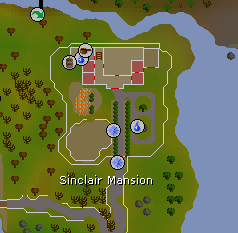 This article is about the Sinclair Mansion character. For the Fossil Island character, see David (Fossil Island).

David Sinclair is one of Lord Sinclair's children. He is a suspect during the Murder Mystery quest. He is also involved in King's Ransom.

According to the Gossip, he has anger management problems, shouting at the household servants when he is angry. As much as they fear his anger, they do not dare to report his behaviour to his father as it would get him kicked out of the house.