Dawn, along with Dusk, are the Grotesque Guardians which require level 75 Slayer to kill. She is the boss version of the gargoyle, found on the Slayer Tower's rooftop. In order to access the roof, players must obtain a brittle key from gargoyles while assigned them for a slayer task. Similar to other slayer bosses such as Cerberus and the Abyssal Sire, the Grotesque Guardians can only be killed while the player is assigned gargoyles as a slayer task.

To initiate the fight, players must ring the Cloister Bell in the north side of the roof. This will trigger a cutscene in which the Guardians will awaken, and the fight will begin. Dawn uses magic, ranged, and melee attacks. She has a special attack in which a grey ball is flung somewhere near her, and if the player is hit by this ball (which covers a 3x3 AoE), they will be stunned and bound, similar to the marble gargoyle's special attack.

Like gargoyles, players must bring a rock hammer or granite hammer to defeat Dawn.

In the beginning of the fight, players must attack Dawn with ranging attacks (as she cannot be harmed with melee and is resistant to magic), as Dusk cannot be harmed during this phase of the fight. Once her health has reached half, both will perform a lightning special attack that has an AoE of 3x3, rapidly dealing up to 5-10 damage per tick. After doing so, she will fly away, and players must attack Dusk. Once his health has reached half, Dawn will return to perform the lightning special attack once more with Dusk.

After returning, she will occasionally send out three energy spheres that will grow larger over time. Players must absorb these spheres, taking small amounts of damage if absorbed immediately, and can deal up to 20 damage if players absorb them later. If players ignore them entirely, each sphere will heal Dawn for 90 hitpoints. After defeating Dawn, Dusk will absorb her essence, and initiate the final phase of the fight.

Main article: Grotesque Guardians#Drops
Dawn does not give anything upon defeat; instead, Dusk does this. 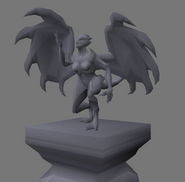