A weapon of light to hold back the darkness. 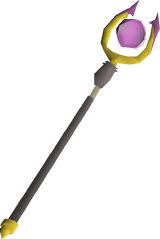 The Dawnbringer is a trident-class magic weapon obtained from the skeleton next to the entrance to Verzik Vitur's throne room in the Theatre of Blood. When a player takes the staff from the skeleton, a chatbox message will state You find the Dawnbringer; you feel a pulse of energy burst through it.

It shares the same bonuses as the trident of the swamp and the Sanguinesti staff, and is used to break Verzik Vitur's shield during the first phase of the final fight against her, with the damage having a unique cyan hitsplat (

The Dawnbringer cannot be brought outside of the raid. Should players somehow successfully smuggle it out of the raid, it is automatically destroyed.[1]

The staff's special attack, Pulsate, fires a powerful blast towards Verzik Vitur, inflicting 80-150 hitpoints of damage towards her and consuming 35% of the wielder's special attack energy.

As players must deplete her health quickly before all the pillars in her throne room collapses, it is mandatory for teammates to drop the staff for another player to perform the special attack once they have depleted their own special attack energy.