Go to Lumbridge, and go to the basement in the castle below the cook. Take a light source, such as a lantern, and enter the cave to the rear of the basement. Talk to Kazgar who will show you through the caves.

Once you have these, return to the Lumbridge Castle cellar, and talk to Zanik who will have appeared next to the ladder to the cellar. (Note: You cannot have a pet following you before talking to Zanik.)

Zanik follows you around rather like a pet and tends to get stuck behind walls and doors but she will return to your side like any other pet. Unlike pets, any teleports will make her return to the basement below the cook, and talking to her will make her follow you again. The following can be completed in any order but the quickest is as listed: 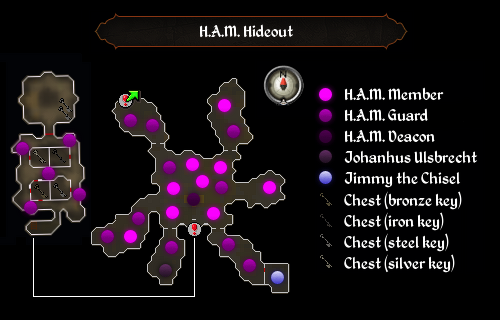 Note: If you get caught by a guard, you will be jailed and Zanik will free you - if you interrupt Zanik before he lets you out, pick the lock on the door. You will have to repeat the process of killing the guards.

Warning: If you happen to slip on the stepping stones carrying a candle lantern it will break, leaving the player stranded without a lightsource (apart from a candle itself after the lantern breaks, which is risky to use in the Swamp Caves). For safety precautions, bring any kind of quick teleportation if needed.
Note: This does NOT count for your weekly Tears of Guthix game, and it gives you no experience.
Note: If you for some reason die with Zanik, she will spawn again at the H.A.M hideout.

Preparing for the battle

Items recommended: Melee or Magic Equipment (not ranged) to deal with three level 22 guards and one level 50 boss; food

Note: Make sure you're wearing the full HAM outfit before talking to the dwarf.

Note: By using the crates nearby, you are able to safe-spot using magic or range.
Note: The area is instanced even though there is no warning and thus if you die you will lose your items.

Note: If you don't have a light source, Zanik will provide you one after the cut scene when going through the short cut. 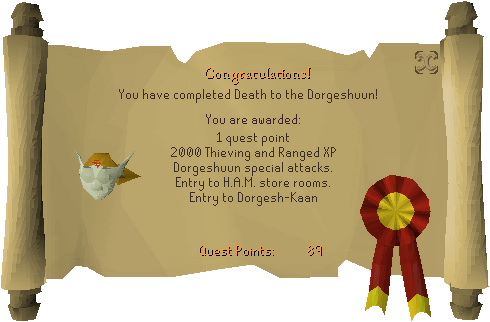 The completion of Death to the Dorgeshuun is required for the following: