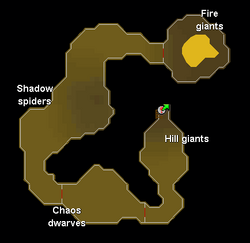 The Deep Wilderness Dungeon can be found in level 51 Wilderness. The entrance is via stairs in a broken house west of the Mage Arena. It is entirely single-way combat and covers level 49 to 54 Wilderness.

Fire giants are the main attraction here due to Krystilia assigning them as a Wilderness Slayer assignment, and this being their only location in the Wilderness.

A crevice can be found near the staircase; this will take the player straight to the fire giants. Use of this shortcut requires 46 agility, and completion of the medium tier of the Wilderness Diary.

There is also a grimy guam leaf that spawns in the dungeon.

Players who are planning on killing fire giants that do not have access to the crevice shortcut are advised to bring prayer potions as the shadow spiders along the way will drain half of the player's current Prayer points when combat is initiated and at regular intervals.

There are no initial available safe spots at the fire giants unless one stands on the other side of the gate, but this is in range of the shadow spiders. However, once the giants become tolerant towards the player, they can use the lava pool or cavern walls to safe spot the giants.

A safe spot available at the fire giants, after they become unaggressive.