Items required: 1 coin (Ensure you do not bring all of the bones, or else you won't have enough room in your inventory for the keys)

The Gypsy will tell you about a story involving a demon named Delrith after paying her one coin. He is being summoned again, and you have to kill him. Ask her, "So, how did Wally kill the demon?" Write down what Wally says as it will be important later on. She tells you to talk to Sir Prysin to help. So, go north to Varrock Castle (Palace), and near the stairs of the castle (first room on the left), Sir Prysin should be walking around.

Note that the incantation is random for each player, make sure you write it down.

Tell Sir Prysin that the Gypsy sent you. Ask for Silverlight, the weapon needed to kill Delrith. He will say that he kept it hidden because of it being so powerful and it needs three keys to open it. Sir Prysin can be found west of where King Roald is found.

One of the keys may be obtained by speaking to Captain Rovin, who is found on the 2nd3rd floor[?] on the north west side of the palace. From the room Sir Prysin is in, walk north until you reach the northwestern staircase, climbing up two stories to reach Captain Rovin.

Tell him that you need the key in order to recover Silverlight, as a demon is going to invade the city, and that Sir Prysin mentioned that he would give the key to you. After some arguing, he will reluctantly give you the key, berating Sir Prysin on his clumsiness.

Take 25 bones to the Traiborn located on the 1st2nd floor[?] of the Wizards' Tower south of Draynor Village. Talk to Wizard Traiborn about the key asking him if he got any keys knocking around, and he will ask for 25 bones. If you have them already, give them to him. If not, get 25 regular bones (noted bones will not work). One does not need to give Traiborn all 25 bones at once. Almost every creature in Gielinor drops bones (if one has low hitpoints or combat level then there is a chicken in the basement of Wizard's Tower). Give him the bones and Traiborn will perform a ritual. When he's done with his ritual, he will give you his key.

Head back to Varrock palace.

Go into the room on the ground1st floor[?] located north-east. It looks like a kitchen. If you do not already have a bucket of water, look for stairs or a ladder that leads up. Go up them, and then go into the room near you to see a bucket. Grab it. Now, go back down, and in the kitchen, look for a sink (if you cannot find the sink, you can fill the bucket at one of the two fountains near the southern entrance to the palace). Use the bucket with the sink. Now, you will have a bucket of water.

Next, go out the door in the kitchen that leads outside and look for a drain. Use your bucket of water with the drain; if you do not do this, you can not obtain the key. The second key will have fallen down. Head east out of the palace, and look for a manhole. On your minimap, it will have a red exclamation mark. Climb down the manhole. Now, go north-west and follow a path until you reach a stream. You should see an old rusty key to your left, next to a pile of skeletons. Pick it up.

Now that you have all three keys, go back to Sir Prysin in Varrock. Give him the three keys, and he will give you Silverlight. Players can drop the Silverlight and ask Sir Prysin for another one for free; after the quest he will charge 500 coins. Make sure that you equip it. Lower-level players may want to get some armour and food at this point.

Make sure to talk to Gypsy Aris (at her tent in Varrock Square) about the magical incantation to use on Delrith. Take note of the incantation words; they are different for everybody.

If you are ready, then head south of Varrock and then east towards the stone circle surrounded by dark wizards. A cutscene of Delrith being summoned by the wizards is shown after first entering the circle for the final part of the quest.

The final part now takes place in a setting containing Delrith and fourteen wizards, with the surroundings darkened, isolated from any other activity in the area. Lower-level players should be aware that the wizards are aggressive to players less than double their level plus an additional level, and use magical attacks entering the circle for the final part of the quest.

Lower levelled players should consider approaching the stone circle from the south rather than from the north, which makes it easier to get Delrith attacking you, and not the wizards. A Ring of recoil can be used to make the fight easier. Beware, if you die inside the instanced area, it is not possible to retrieve the items you have lost.

Attack Delrith with Silverlight equipped. When he is weakened, say the magical incantation, which will appear automatically. If the wrong incantation is said, Delrith will regenerate to full health. 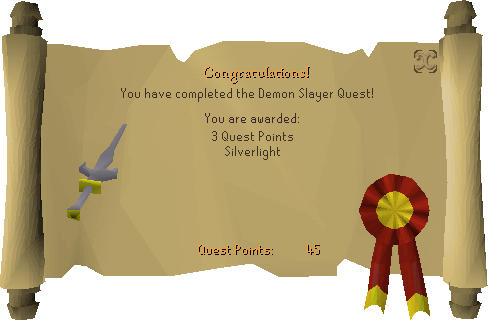