View source
watch 02:53
GTA: The Criminal Enterprises - The Loop
Do you like this video?
Play Sound
RSCRS
This article is about the underground Digsite dungeon. For the surface location, see Digsite. 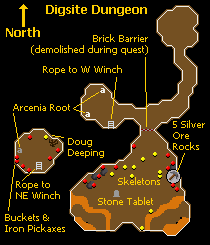 The Digsite Dungeon is below the Digsite and can only be accessed during and after The Digsite quest. It appears to have once been a temple of Zaros.

Players rarely use the dungeon after the quest, because of the dungeon's distance from a bank, though it has several iron pickaxe and bucket spawns and five silver rocks.

The entrances to the dungeon are at the Digsite. Players can walk to the Digsite from Varrock. There are also two fast ways to get there:

Note that the two parts of the dungeon are in different locations with respect to one another than you would expect from their surface entrances. If you use the northeast winch, for example, you end up in the chamber that is southwest of the west winch's entrance point!

Dungeon from the northeast winch entrance

The sacks in the north part of the chamber are the object of a Treasure Trails clue.

Dungeon from the west winch entrance

Upon entry, the player is in a small chamber with the rope to the surface and two arcenia root spawns.

The chamber to the northeast has some crates and barrels but no monster or item spawns.

The southern part of the dungeon differs depending upon how far the player has advanced: