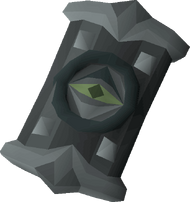 Dinh's bulwark is a two-handed shield created by Dinh, a Lovakengj smith of unparalleled skill. It requires 75 Attack and Defence to wield and is obtained as a rare reward from the Chambers of Xeric.

It is the strongest shield in-game barring any effects (surpassing the Dragonfire shield and its equivalents). As a two-handed shield, the bulwark is also capable of attacking opponents. In order to attack with the bulwark, it must be set to the pummel option. This also allows it to perform its special attack.

While the block attack style is active, players lose the ability to attack but incoming damage is reduced by 20%. The damage reduction will not work in PvP. In addition, there is an 8-tick (4.8 seconds) delay before the damage reduction applies when switching weapons to prevent abuse by people equipping it on a defence tick and switching back to a damage-centric weapon for the attack tick. Furthermore, players wielding the bulwark will not be able to cast any combat spells; players attempting to do so will receive the message "Your bulwark gets in the way.".

Dinh's bulwark has a special attack, Shield Bash, which hits up to 10 enemies in a 11x11 area around the player with 20% increased accuracy, consuming 50% of the player's special attack energy.