Old School RuneScape Wiki
Register
Don't have an account?
Sign In
in: Mines, Mining, Between a Rock...,
and 2 more

Completion of Between a Rock...
(The gold helmet must be equipped to enter the mine) 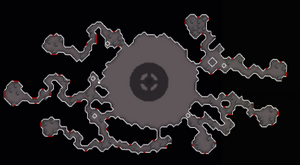 Dondakan's mine is just south-west of the dwarven capital city of Keldagrim. To access the mines, players must have completed the Between a Rock... quest and have a gold helmet equipped. They must then speak to Dondakan, a dwarf which stands near the entrance. He will then shoot them into the mine using his dwarf multicannon. To leave the mine, simply unequip the helmet or log out.

This mine contains the most concentrated number of gold rocks and gold veins in all of RuneScape, numbering in at 146 rocks, making it the second largest mine in the entire game (other than the Motherlode Mine). There are very few mines containing more than a few gold rocks, and gold respawns fairly slowly, so gold can be difficult to obtain in bulk. The Arzinian Mine is unique because it not only is a massive source of gold, but it also gives players a convenient method of banking the ores. Because of this, it is one of the most popular gold mining areas amongst players. However, because of its quest requirement, the mine is usually empty, and players can have the entire mine to themselves in most worlds.

If the player is wearing the ring of charos (a), then the dwarf will only charge 10% of the gold ores (rounded up). This is highly recommended, as the regular cost can quickly add up.

The nearby city of Keldagrim greatly attributes to the mine's usefulness. The city boasts many features that will prove useful to players while mining the gold. Amongst these features are the Blast Furnace, a bank, an ore shop, a general store, a hammer respawn, and five anvils.