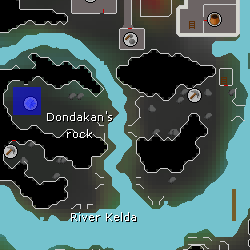 Dondakan the Dwarf is a dwarven miner and the father of Commander Veldaban. He is the main character in the Between a Rock... quest.

Dondakan has spent 18 years of his life attempting to open a seemingly impenetrable rock in the Keldagrim south-west mine. While he had many dwarves helping him at one point, they have all since left, leaving him alone in his work. He now spends every bit of money he can dredge up in an attempt to open the rock.

Dondakan has tried many different methods to break the rock, such hitting it with a pickaxe, shooting it with several types of cannonballs, and kicking it with granite boots. None have been successful, and the cost has taken a toll on him.

Once the quest is complete, he can send players to the Arzinian Mine, the largest gold mine in RuneScape, although they must be wearing a gold helmet.

Retrieved from "https://oldschoolrunescape.fandom.com/wiki/Dondakan_the_Dwarf?oldid=8084831"
Community content is available under CC-BY-SA unless otherwise noted.