Dragon Slayer II is a quest released on 4 January 2018. It was announced during RuneFest 2017, and is a sequel to the original Dragon Slayer quest.

To start the quest, first speak to Alec Kincade outside the Myths' Guild. He will let you join the guild if you can discover an ancient secret, and tells you to meet up with Dallas Jones at Karamja Wines, Spirits, and Beers.

Speak to Dallas Jones, who will realize you are the Hero of Crandor after learning that you slayed Elvarg. He tells you to meet her in her old lair. Once inside, use a pickaxe on a covered up wall at the north-eastern corner. Should a player forget their pickaxe, just outside her lair, there is a rock with a bronze pickaxe embedded in it. When the wall crumbles, go in.

Inspect the machinery to the east for some old notes, then attempt to inspect the mural. A spawn will burst out from the nearby pot and attack you; kill it. Once it is killed, reinspect the mural again, which Dallas states that it means the House by the Hill on Fossil Island. Head there.

The quickest way to reach the House on the Hill is with an enchanted Digsite pendant; refer on the page on how to access this form. Once inside, head downstairs, where Dallas states that you need to finish this puzzle. He gives you some puzzle scraps, which you can give to him to hold. You need to find the other 24 scraps, which are found near or around the House on the Hill; don't go past the bridges, as there's nothing there.

Once all map parts are given, it's time to solve the puzzle. You need to map out the area using the pieces you obtained. Some pieces are stuck, so those can't be moved. The remaining can be turned and moved around as desired. You'll know when you've completed it when your character mentions it. Dallas tells you to look for Jardric, who is found at the Fossil Island Camp next to the General Store, while he stays behind to take a copy of the completed map.

Jardic tells you that he can use a boat, but requires 8 Oak planks, 10 Swamp paste, 12 nails of any kind (NOTE: YOU MAY BEND NAILS, BRING EXTRAS), a saw, and a hammer. Once you have these materials, you can build the boat, which is just north-west of the Mushroom Forest.

The easiest way to get there is with the enhanced Digsite pendant, as the mushtree taking you to the forest is extremely close to the shore. Build the boat.

Make your way towards Lithkren. Head slightly north and up the stairs of the only accessible building. Travel south down the trap door, down the stairs to the north, and follow the path. Meet Dallas at the bottom. He tells you that he found these doors but can't open them. Search the nearby burnt skeleton for an old diary, then speak to Dallas again. You suggest that Bob the cat may help, which Dallas finds absurd but trusts you.

Find Bob, who can be located in a large array of places. Using your catspeak amulet (e) from A Tail of Two Cats will prove very useful here.

A few of the common locations to find Bob are:

Make sure you have your amulet of catspeak to understand him!

Speak to Bob with your kitten/cat. You tell Bob about his memories as Robert the Strong, which he can't remember. So the group suggests to talk to the Sphinx again, so meet him at Sophanem. The Sphinx tells you that she has given you the ability to speak with cats without having the amulet of catspeak on, as you've proven yourself to be a friend of the felines. Tell the Sphinx of your problems; unfortunately, she can't help you. However, you then remember of the Oneiromancer, and you tell Bob to meet you there. Make sure you bring your Seal of passage if you haven't completed the Fremmenik Elite Diaries yet!

The Oneiromancer gives you a dream vial, telling you that you need to make it the same way as you helped Cyrisus in Dream Mentor. Once you make the potion, light the brazier to the building at the far west and use the dream potion on it. Make sure you put your cat away for this next part.

Entering Bob's dream, Not Bob tells you that the guardian needs to be defeated to bring back Bob's memories. You must fight Robert the Strong. He is level 194 and uses Ranged. Prayer can be used during this fight, however he is able to hit through prayer; it's highly recommended to bring some food as he can deal some damage. additionally he wont be able to be damaged by ranged attacks. (NOTE: Crush attacks seem to work the best). Make sure to maximise your range defence and crush attack. Two handed crush weapons should not be used as this will guarantee a very fast death.

When Robert says "Let's see if you can hide from this!", run to a pillar and hide behind it. This will protect you from a strong arrow which will deal heavy damage and will disable your current prayer(s) if you let it hit you. It is best to eat any food to heal at this point while running to allow you to continuously hit without pause during the fight. Robert will then bring you back to him for being a coward. Repeat until he dies. Bob will then remember everything now that the guardian is killed.

If you die fighting Robert, a chest near the brazier will allow you to reclaim items for a fee of 100k. Don't die again anywhere though, or the contents will be lost!

Bob tells you that he hid several key pieces around the world after the incident.

Bob tells you that he hid the Karamja key on the south coast of Karamja; the Kharazi Jungle. Head towards the south-eastern area of the shore, where there's staircases leading underground. This takes you to a maze.

You have to navigate the maze, with traps consisting of spike and man traps. The spikes can be disabled through thieving, and man traps leaped over with Agility. To make matters worse, there's also multiple Stone guardian wandering the area in a multi-combat environment. Each Stone guardian only uses one combat style (indicated by the color on them), so pray accordingly. West, South, east all the way, north, west, south. The traps will do more damage than tanking a wrong pray guardian so mouse over corners before running to save food.

Once you reach the center, grab the key piece. The plinth also activates to for a two-way transport between the entrance and center.

Bob tells you that he had a trusted friend hold onto this key. Go to Varrock, and speak to Reldo regarding this. He'll tell you of the book, and that he doesn't remember where it was, but knows that it had a red cover. Search the bookcases until you find it, then he'll read it. Apparently, the family of the person you're looking for seems to have moved over to Morytania, so go to Port Phasmatys.

Make sure you have your ghostspeak amulet equipped. Speak to the villagers, and they'll lead you to a ghost woman just west of the bank. Speak to her about the key; she buried it in the swamp because she didn't feel comfortable around it. You'll remark about a device that may find it, so head to Draynor Manor and speak to Ava. She can make you the device if you make her a locator orb, from two pieces of molten glass and a cut dragonstone with a glassblowing pipe. Make it, then give it to her.

It's time to search for the key. The orb acts much like similar items, damaging the player when used in return for telling you where it is. Make sure you have food to last the trip. Be wary of ghasts, as they may rot your food. Once you find the exact location, dig it up.

Bob tells you that he hid another key in an abandoned fort of Rellekka. Talk to Brundt the Chieftain about this fort, and he tells you that a dragon has slain many of his warriors who went there. He'll give you permission to fight the dragon, and that Torfinn will take you there. Kill Vorkath. Go into lair. find hidden lever* in southwest of map and pull to unlock door. Be sure to have an extra inventory space for the Ancient Key, also in the chest, that you will need later.

During the fight pray mage, It would be beneficial to set up quick prayers as he frequently disables prayer, bring an antivenom+ or serpentine helm as he applies venom to the player. During the phase where he spits acid move continuously every tick to avoid damage. In another phase he summons a small decending meteor/ fireball avoid the 3x3 area around this as the attack hits 60+

*Lever is in southwest corner between the crates.

Head to Amelia in Shayzien house. She is in a hut south-west from the bank, west of the clothes store. While you are nearby, grab a tinderbox and a lightsource. She will tell you to go to the Shayzien crypts. They are in the south western part of the Shayzien graveyard (dungeon icon).

Note: If you get it wrong, you'll get another clue/puzzle from the tomb.

Travel to the ancient caverns. Once on the floor with the green dragons, follow the east wall until you reach stairs leading to the Mithril Dragons. Once up the stairs, travel west to a door on the north side of the wall and go inside. Use fire spells on the three structures. Go back out and travel east and down the stairs. run to the south west corner where the barbarians are and go up the stairs. Continue to the end and forge the four pieces together.

Once you have the combined key, go back to the dragon door* and place the key into it.

*The dragon door is located on Lithkren using the boat on the west coast of Mushroom Meadows on Fossil Island.

A cutscene will play once you enter the dragon doors and continue down. Once the cutscene is over travel to King Roald in Varrock castle. You then have to talk to Sir Amik Varze in Falador, King Lathas in Ardougne, and Brundt in Rellekka.

Once you have talked to everyone, travel back to Varrock castle and go through the north door of King Roald's room. Talk to Bob after you leave the room.

Final part on the boats

There's four checkpoints during this final part of the quest. Once you completed any of the four seperate parts you won't have to do it again. When you teleport or die you can reach these checkpoints again by speaking to the sailor on the Relleka docks. You can also reclaim your items there if you died for a 100k fee. The checkpoints are:

CAUTION: Galvek will shoot fireballs at you while you're fighting the other dragons. 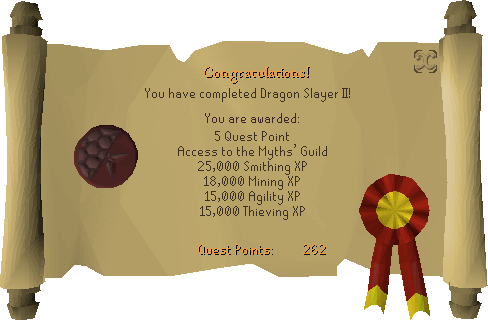 Retrieved from "https://oldschoolrunescape.fandom.com/wiki/Dragon_Slayer_II?oldid=5501610"
Community content is available under CC-BY-SA unless otherwise noted.