View source
watch 02:56
Raise a Floppa - The Loop
Do you like this video?
Play Sound
RS
Loading...

A light shield with a haunting, skeletal visage.
Loading... 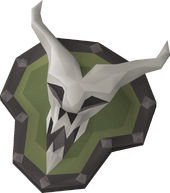 The dragonfire ward is a ranged shield requiring a Ranged level of 70 and a Defence level of 75 to equip, as well as having started Dragon Slayer.

The ward offers two special characteristics: it acts like a regular anti-dragon shield in terms of dragonfire protection, and it also protects against the icy breath of Wyverns, similar to the elemental, mind, ancient wyvern, and dragonfire shields.

A light shield with a haunting, skeletal visage. 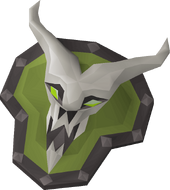 The dragonfire ward is a ranged shield requiring a Ranged level of 70 and a Defence level of 75 to equip, as well as having started Dragon Slayer.

The ward offers two special characteristics: it acts like a regular anti-dragon shield in terms of dragonfire protection, and it also protects against the icy breath of Wyverns, similar to the elemental, mind, ancient wyvern, and dragonfire shields.

The dragonfire ward is created by attaching a skeletal visage to an anti-dragon shield at any anvil. The process requires 90 Smithing and a hammer, giving 2,000 Smithing experience and an uncharged dragonfire ward. Players who do not have the required Smithing level to make the ward can go to Oziach in Edgeville, who will smith the ward for any player at a cost of 1,250,000 coins.

The skeletal visage is dropped exclusively by Vorkath.

As it absorbs the dragonfire attacks of adult dragons, the dragonfire ward builds charges. The ward can also be charged by absorbing the breath attacks of wyverns, although it will still discharge dragonfire. Each breath attack gives the ward one charge, and each charge increases its Melee and Ranged defensive bonuses by +1. The ward can hold up to 50 charges, giving a total bonus of +50 to Melee and Ranged defences, in addition to the ward's base Defence bonuses. The Check option, while the ward is in the inventory, can be used to check its current number of charges.

A quick and efficient way to charge an uncharged dragonfire ward is to be attacked by a metal dragon's long-range dragonfire attack, which is not only quicker than a chromatic dragons's attacks, but also will not include Melee attacks. Use of food or an antifire potion is recommended due to the fact that 50 dragonfire attacks, even significantly weakened by the dragonfire ward, can build up and cause substantial damage. Food isn't necessary with an antifire potion.

Additionally, there are three ways to charge a dragonfire ward in complete safety.

The fastest way to recharge the dragonfire ward is by recharging it in the Catacombs of Kourend. If entered at the centre using the Teleport to Kourend spell (or Xeric's Heart teleport via Xeric's talisman), just run directly north to the iron dragons. You can let yourself be hit by the two iron dragons and the three bronze dragons there. It will take less than 1 minute to get 50 charges if none of the dragons are in melee range, but be sure to bring an antifire with you.

During Combat, the dragonfire ward can expend one charge to unleash a blast of dragonfire at one target, which can hit approximately 25 damage. This attack can only be used once every two minutes, and each expended charge reduces the ward's Melee and Ranged defensive bonuses by one. Note: you do not have to use these attacks, as it does lower the wards defensive bonuses per attack. The dragonfire attack follows the standard rules for dragonfire; it will be less effective against a target that has resistance to dragonfire, such as a player that used an antifire potion and/or an anti-dragon shield or dragonfire ward. Furthermore, the dragonfire attack will not work against chromatic dragons, skeletal wyverns and some boss monsters, although metal dragons are vulnerable to it.

The dragonfire attack can be used at range (up to 10 squares away) and over obstacles, after which the user will initiate a normal attack with their equipped weapon,

Players can drain all of the dragonfire ward's charges at once by right-clicking the ward in the inventory and selecting Empty. This will release all of the ward's charges in a harmless burst. This function is useful when selling or trading the ward, as it can only be traded when completely uncharged.

Also, if dropped on death in an unsafe environment, when recovered, the dragonfire ward will be completely uncharged.