Old School RuneScape Wiki
Register
Don't have an account?
Sign In
Advertisement
in: Articles in need of cleanup, Cities, Locations 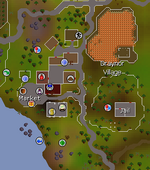 Draynor Village is a small village located between Falador and Lumbridge. Draynor Village offers a popular willow Woodcutting spot just south of the bank and good ranging targets in the south-east as well as several stalls and a master farmer to steal from. Draynor Village is under the administration of Varrock, due to the fact that it is part of the kingdom of Misthalin.

Prior to the Vampire Slayer quest, Draynor Village is terrorised by the vampire Count Draynor, who lives in the large mansion north of the village.

Diango's Workshop is where much of the 2014 Christmas event took place, and where players can go to get replacement marionettes. Players who didn't participate in a holiday event there can't go down the ladder into the workshop. Players who have lost hats and scarves or yo-yos can talk to Diango to have them returned. The 2013 Hallowe'en event also took place in Diango's Workshop, when players were rewarded with the Skeleton Costume and Jack lantern mask.

A field filled with grain you can pick. South of this field players will find Leela, one of the major characters in the Prince Ali Rescue quest.

The northwest entrance to the Draynor Sewers is located slightly northwest of Aggie the Witch's house, while the southeast entrance is located within Lady Keli's jail compound.

Zombies and Skeletons inhabit this dungeon, with a few rather unreliable cover spots to fire Crumble Undead spells from.

There is an anvil and a permanent fire in a chamber within the dungeon.

Talk to Morgan in his house to start the Vampire Slayer quest. You can also pick up the required clove of garlic by searching the cupboard upstairs.

Aggie the Witch lives in her house in Draynor Village. Players can bring her ingredients to get dyes and some other quest related item made. There is also a free respawn of cheese and tomato, which are useful for cooking pizza.

Ned is an old sailor who's good with ropes, maps and boats. Players can trade him 4 balls of wool or pay him 15 coins for a coil of rope. He is also involved in the Dragon Slayer quest.

This used to be a two door cut-through, but the north entrance is no longer available.

This is now the home of the Wise old man, who can check your bank for leftover free-to-play quest junk. He may buy some items, like the Silverlight, but steals any runes you show him.

There are strange books on the shelves, as well as large quantity of tinderboxes, and rumours of some most untoward goings on, including a bank robbery and a monster hiding under the bed. Just as strange, his telescope upstairs is pointing directly towards the Wizards' Tower.

A toy stall owned by Diango also available for exchanging items. You can buy toy horses and spinning plates here. He also returns holiday items if you lose them.

Evidence of increased security, with one guard standing outside the bank, and another up a tree... go on, try cutting the tree (or even talking to it)! The guard up the tree also has a taste for stew, and will give you 20 coins and later drop the bowl down - with the potato field to the east, and the chicken farm to the west, this is on a par with doing banana picking as a source of a little handy cash. The bank also is one of the most popular locations for people to buy and sell willows as a collection of willow trees are nearby. It is also a very popular place for players burning logs because of the bank's proximity to the willow logs, which gives a decent amount of experience in Firemaking for burning.

Lady Keli's jail guards are an aggressive rabble who set upon travellers on the paths by the compound. Approaching from the east normally allows a quicker entry to the jail, with less exposure to the guards.

Because of the jail guards and the area being a multi-combat area, the jail and its compound are very dangerous area for low-level players. New players are especially known to get killed in this area because the jail is just adjacent to roads where these players travel

There are also some nettles nearby.

Found south-east of Draynor on the north-western side of the Lumbridge Swamp, the Heroes Camp, has 4 adventurers searching for the "Lost City" of Zanaris. You can speak do any of them to start the Lost City quest. The 4 adventurers consist of a Warrior, Wizard, Ranger, and Monk.

This spot is famous for having many willows and being near a bank, it is sometimes heavily crowded.There are willow trees close by, with oak trees and normal trees not too far away. Low levels should watch out as aggressive dark wizards roam near the northern area of the willow trees. These dark wizards are level 7 so a player level 15 or higher would not be attacked.

It is because of the proximity of these willow trees from Draynor's bank that made Draynor village very popular for players cutting willow logs as well as buying, selling, and burning willow logs.

Players with 10 Agility can use the rooftop course, by climbing the rough wall of the northernmost house. The course finishes next to Ned's House.

To the north of the village is a large mansion which is home to three quests as well as the interdimensional portal that takes players to the Killerwatt dimension.