Dream Mentor is a

Lunar Isle. It revolves around helping an adventurer conquer his fear of

lunar set may help, as will carrying

runes to teleport back to the bank.

Now you have to reach 100% in all of his remaining stats. Once Cyrisus has reached 100% in all stats, he'll tell you that he's afraid of

Combat. Afterwards, you'll agree to accompany him to the

Oneiromancer—exit the mine, and go southward.

Items required: Goutweed, a hammer, a pestle and mortar and an astral rune.

A player with level 70+ in all melee stats without boosting using a super set can still use an entire inventory of sharks during the first form of the boss, it hits incredibly hard and is fairly accurate, even in decent armour such as

dragon armour. The first form however is also the only difficult part of the fight, the other three being safespottable are not a challenge at all.

It is highly recommended that a player using Melee takes a Halberd to tackle the second and third forms of the boss. The fourth form of the boss is weak and basically not a challenge, so in reality, the entire fight is three bosses, two of which can be fully safespotted.

(WARNING: if players are using the lectern as a safespot, immediately after The Everlasting dies players should run out of the safespot, and run back when the Untouchable spawns. This because the Untouchable upon spawning will neglect the safespot and attack the player. The player would be unable to pass through it and thus will have to receive unavoidable and unnecessary damage.)

Add a photo to this gallery

Note: DO NOT bank your Seal of Passage after the fight. You will need it to finish up the quest.

Travel back to the

Oneiromancer on the southeast of

Lunar Isle. Both she and 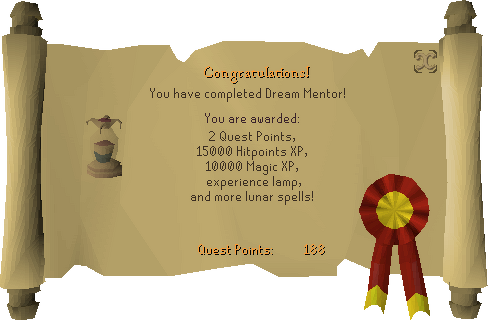 Retrieved from "https://oldschoolrunescape.fandom.com/wiki/Dream_Mentor?oldid=8694124"
Community content is available under CC-BY-SA unless otherwise noted.