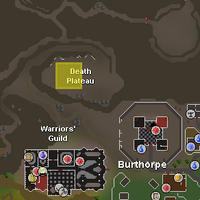 Dung is a troll chef located in the caves of Death Plateau. As trolls are usually named by the first thing they ate, it is safe to assume that Dung once consumed excrement.

He can be found standing next to his colleague, Ash, in the centre of the plateau just in front of the cauldron they both maintain.

When the player searches the cauldron in My Arm's Big Adventure, the troll cooks attack with weak Ranged attacks. They hope to put the player in the stew for dinner.