View source
watch 02:40
World of Warcraft: Dragonflight - The Loop
Do you like this video?
Play Sound
RS
Loading...

This looks very rusty and worn. 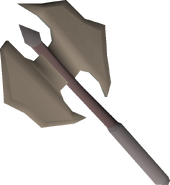 Three sapphires have been crafted onto the hilt. 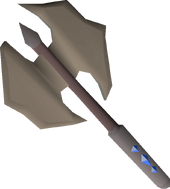 The axe blade has been sharpened. 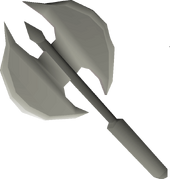 This axe has a sharp blade and there are sapphires in the hilt. 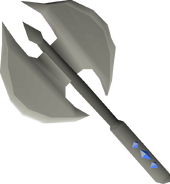 The dwarven Battleaxe is a quest item from The Giant Dwarf. It can be obtained by talking to Santiri, a dwarf who lives in Keldagrim near the bank. Initially in a poor state of repair, the player first must use three sapphires to repair the hilt, and then take it to Thurgo south of Port Sarim to have it sharpened.

Once fully repaired, the battleaxe can be delivered to Riki the sculptor's model as part of the attire required to complete the new Giant Dwarf statue.

The player may not equip the battleaxe despite a "wield" option. If they attempt to do so before repair, their character says "I should be very careful with this battleaxe, it's almost a museum piece! I don't want to damage it by wielding it." Once restored, they instead say "I went through all this trouble to restore this axe, I'm not going to ruin it now by wielding it and accidentally smashing it to pieces. I'd better take it to the sculptor."