It is safe practice to check the quest journal after each step to ensure you have completed each task. This may save you an extremely frustrating long walk or two.

Start the quest by speaking to

Sanfew (if boosting herblore use before talking to him), who lives on the top floor of the herb shop in

Taverley (ask him about the Varrock stone being cleansed). He will ask you to find out the secret of the herb

Goutweed, in order to perform the next part of the purifying ritual on the

Druid's circle. Only the

Troll Stronghold know about Goutweed, so Sanfew will suggest you speak to his friend

Eadgar who lives near there at the top of

You need to make your way to

Trollheim using the same route as in the

Burthorpe and follow the mountain path out of the northwestern corner of the town. Go south at the fork in the path to

Tenzing's house. If you don't already have

Dad, and use the northern Arena Exit gate. At the next two junctions, head west and then north, and go into the Cave Entrance. Follow the cave round, and use the exit to appear inside Trollheim.

Eadgar is not located in the Troll Stronghold, but rather inside a cave on top of Trollheim on the minimap.
You can use the secret entrance to the Troll Stronghold and then walk through to get to Eadgar. The shortcut is at the northern end of the western fork on the map.

Climb to the top of the hill in the centre of

Protect from Missiles as you run past the

Thrower Trolls to avoid taking large amounts of damage. At the top of Trollheim there is an unmarked cave entrance on the southern side of the summit. When you get to the top, enter the cave and speak to

Goutweed. He will suggest that you speak to the

If you didn't rescue Eadgar during the

Troll Stronghold quest, you will need to do so. He can be found in the prison in the stronghold. Pickpocket the two sleeping guards to get the key to his cell. Once you've rescued him, he will be in the Trollheim cave on the hill. (Even if you have freed Eadgar, he will still be in the prison cell. If you can't steal a cell key from the sleeping trolls to get him out, you know that you have previously freed Eadgar.)

Eadgar's cave, go back down the hill, and head southwest following the path round into the Troll Stronghold. Once in the stronghold, go south and then down the stairs. You'll see four

Troll Cooks here - one of them will be called

Burntmeat. Speak to him, and he will offer to tell you about

Goutweed in exchange for a human to cook in his stew.

Go back and talk to Eadgar. He will have a quick think and then come up with a plan....

trolls into thinking you've given them a human. Go to the zoo in

Ardougne, and talk to

Parroty Pete at the northern part of the zoo near the

wolf enclosure. Ask him both of the possible questions, and he will tell you that their favourite food is

alco-chunks, and then use them on the aviary hatch on the west side of the parrot cage. You'll obtain a

drunk parrot, and tell Parroty Pete that you will take it to the vet. (Do not drop the parrot or it will fly away. If this does happen, you can talk to Eadgar to retrieve it) While in Ardougne, it's also a good idea to pick up your logs, tinderbox, grain, and raw chicken from the bank. Take the parrot to Eadgar. You need to make it look like a human, taste like a human, smell like a human, and talk like a human. (You must do these steps in order, however, you may hand in the items after hiding the parrot.)

Go back to Eadgar to talk about the rest of his plan before proceeding to the next step.
If you pick a Thistle now you can dry it on a fire on the way back to Eadgar. Scroll down to learn how to get the thistle.

After you've done all of this,

Burntmeat won't lie to you about

Goutweed. Look near the grass patches around Eadgar's hill until you find a tiny

thistle growing in one of them. It may take you a while, but keep searching. If unable to find it, one may find it helpful to world hop and check the grass directly north or directly west of the cave. The Thistle's name is yellow when displayed at the top-left of the game window.

Once you've found the troll thistle, make a fire with your second

dried thistle. If you forgot a second log and/or tinderbox, there is a fire in the cave between the arena and Trollheim. Then, grind it with a

pestle and mortar to make

unfinished ranarr potion to make a

Talk to Eadgar again. He will take the potion off of you and tell you that the parrot has had enough by now, so you can get it back. Go back to the prison cells in the

Troll Stronghold by going north from the entrance to the stronghold, down the stairs, east through the door and down another set of stairs, and search the rack to retrieve the parrot and then return to Eadgar.

After you give the parrot to

Eadgar, he will give you the

Fake man. Go back to the cooks in the stronghold by going south of the entrance and then down the stairs, and give the dummy to

Burntmeat. He'll give you a piece of

burnt meat as a reward (which you can discard as it serves no purpose in the quest). He'll also tell you that the

Goutweed is kept in the storeroom and that you can find the key by searching the Kitchen Drawers.

Search the drawers in the southeastern corner of the room, and once you have the

storeroom key, go down the stairs just to the north. This next part is the hardest as you will need to sneak past the guards. If one of them sees you, you'll be knocked out and kicked out of the storeroom. The rocks hit 0-6 damage.

Protect from Missiles blocks the damage but doesn't prevent getting kicked out.

Wait for the two trolls to intersect each other as seen above, then run ahead, allowing the third lighter coloured troll to pass, and then into the first safe spot.

Once in the first safe spot, wait for the two guards seen on the right to walk parallel to each other and then back down. Then run to the second safe spot.

Once in the second and last safe spot, wait for the guards to clear from around the Goutweed crates and then run next to the crate and steal the Goutweed.

The next way to do this is to use the safe spots, which are dead ends surrounded by three crates. Time your movement and run to the first safespot, then wait for your chance to run to the second. You can use the position of the troll guards as an indication of when to move, as the placements of the guards will repeat after one or two cycles. Wait at the second safespot until you get the chance to run to the Goutweed crate and search it. Be careful not to simply click search goutweed crate as this will get you stuck on the sleeping troll instead of going up to the crate. Make sure you click on the spot adjacent to the crate, and then click search goutweed crate. You'll be kicked out after you get one piece of goutweed. Also, if you plan to do

Dragon Slayer II at any point, it is recommended to get two extra goutweed as it is a required item in those quests (note: you can only grab one goutweed per attempt and will have to traverse through again).

Give the Goutweed to 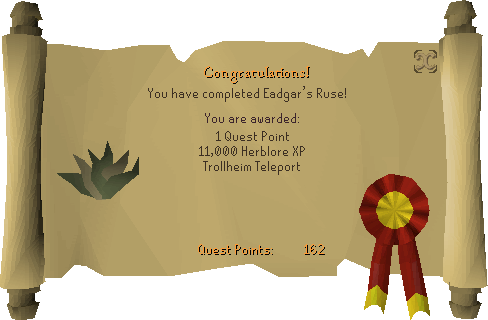