The south-east corner of Lumbridge Swamp 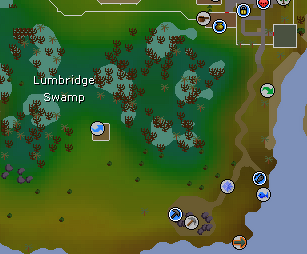 Originally, it was the only mine in the Lumbridge Swamp. It was a mine for experienced miners, with coal, mithril, and adamantite rocks. However, those rocks were moved to the western mine site, and the south-east mine has changed to be a new players' mine, with five copper and tin rocks.

To get to this mine, players can follow the path which leads south from the graveyard in Lumbridge.

The closest bank to this mine is in Al Kharid via the crossbow shortcut. Players may wish to mine equal quantities of copper and tin ore and smelt them into bronze bars using Al Kharid's furnace on the way through. This will add some time to each run; however, the time saved having to run back and forth between the bank and the furnace later on more than makes up for it.

Retrieved from "https://oldschoolrunescape.fandom.com/wiki/East_Lumbridge_Swamp_mine?oldid=9050483"
Community content is available under CC-BY-SA unless otherwise noted.