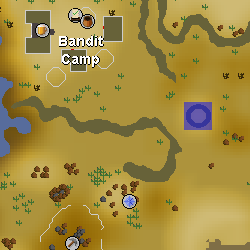 Eblis is a Zarosian mystic who plays a large role in the Desert Treasure quest. During the quest, the player helps Eblis free the Mahjarrat Azzanadra from his prison; to do this, the four Diamonds of Azzanadra must be collected, and to this end Eblis (with the player's help) enchants a number of mirrors to discern the diamonds' locations.

He will sell a player one Ancient staff upon completion of the Desert Treasure quest for 80,000 coins. In addition, he will give players ancient signets, a component in building Ancient altars.

Retrieved from "https://oldschoolrunescape.fandom.com/wiki/Eblis?oldid=8211359"
Community content is available under CC-BY-SA unless otherwise noted.