An icy key that can access the boss rooms of all four gods. 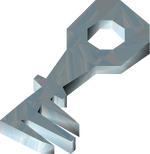 An ecumenical key is an item dropped by all monsters (excluding aviansies) in the Wilderness God Wars Dungeon east of the Forgotten Cemetery. A player can use the key to instantly access the boss room of any one of the four Godwars bosses (General Graardor, Kree'arra, Commander Zilyana, and K'ril Tsutsaroth) without having to obtain 40 kill-count. Once the key has been used, it will disappear from the player's inventory.

Note: If a player has 40 killcount for a respective boss as well as an ecumenical key in their inventory, upon entering the door, it will take away the 40 killcount rather than your key.

While all monsters except Aviansies can drop the ecumenical key, high levelled monsters can take a while to kill. The fastest way to obtain keys is simply kill extremely weak monsters, such as imps, goblins, icefiends and pyrefiends. You may also choose to kill high levelled monsters that are about to die, since the ice/pyrefiends tend to attack other monsters and will hit often against other melee-based monsters (remember to have the appropriate Slayer level for spiritual creatures).

The drop rate of the ecumenical key is 1/60. However, once you possess a key (in your inventory or your bank), the drop rate decreases by 10 to 1/70 and 1/80 for your second and third keys. You are limited to three keys; if you get more than that, you will be unable to pick up anymore until they are destroyed or used.

However, upon completion of the Medium or Hard Wilderness Diary you can hold up to 4 or 5 keys at a time. In addition, the drop rate of 1/60 will persist for the first two/three keys, after which the drop rate starts to decrease.[1]

There is also a cooldown period lasting about three minutes[2] during which you can't obtain another key, but you can hop worlds to avoid this.