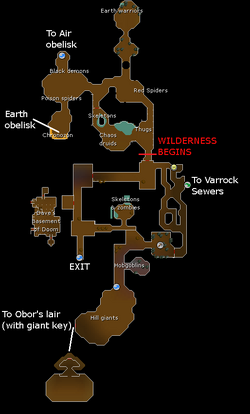 The Edgeville Dungeon is a dungeon in Edgeville. It contains a large variety of monsters spanning across a wide range of levels. It can be accessed by a trapdoor south of the Edgeville bank, or a locked shed (requiring a Brass key to open) west of the Cooks' Guild.

The southern half of the dungeon is free-to-play, and is a popular location for killing Hill Giants on free-to-play worlds. The northern half is members-only, and is in the Wilderness, so anyone who wishes to explore the deeper parts of this dungeon should watch out for PKers and only bring items that they are willing to lose. The Members' area is a popular location for killing Chaos druids.

Vannaka the Slayer master can be found here.

There are two entrances to the dungeon. The most common is in Edgeville, in the ruined house south of the bank via a trapdoor by a coffin. The entrance is marked by a dungeon icon (

The other entrance is found in a locked shed northwest of the Cooks' Guild near Varrock on the east side of the River Lum. To get in, the player must bring a brass key, which can be found in the dungeon.

The location of the locked shed.

An annotated map of the Edgeville dungeon. (click to enlarge)

Entrance to the Edgeville dungeon without the brass key.