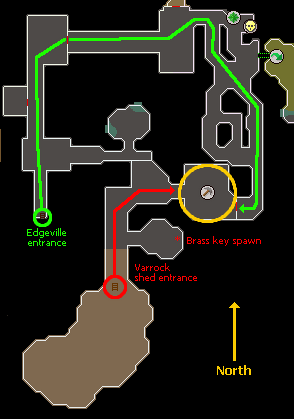 The Edgeville Dungeon mine is a mine near the centre of the Edgeville Dungeon located within the dungeon. The mine itself is north of the hill giants and the ladder near the brass key. It is south of Vannaka and the Agility shortcut to Varrock Sewers. It is sometimes called the Skeleton Mine by some (not to be confused with the other Skeleton Mines like the one in low level Wilderness) because of the many Skeletons there. However, there are several other mines guarded by skeletons, such as the Southern Wilderness mine. The mine is rarely in use on any worlds, although sometimes you can find a lone miner using it for its coal supply.

It is a compact mine with a variety of ores. The resident skeletons and the occasionally visiting hobgoblin may be dangerous for players with low Combat levels.

This mine can be a very effective place to mine coal and iron, as a good alternative to more crowded places such as the West Lumbridge Swamp mine or the Dwarven Mines, or Mining Guild. Players can mine all of the coal, mine the iron, drop the iron, and continue mining coal. This method wastes no time at all and is relatively fast experience.

As with any coal mine, using a coal bag will help immensely.

However, it is recommended to have a Combat level of at least 57, so the Hobgoblins and Skeletons will not bother you.

There are also four bone respawns in the northeastern part of the mine, so it can also be used to train Prayer for beginners simultaneously.

Retrieved from "https://oldschoolrunescape.fandom.com/wiki/Edgeville_Dungeon_mine?oldid=9049929"
Community content is available under CC-BY-SA unless otherwise noted.