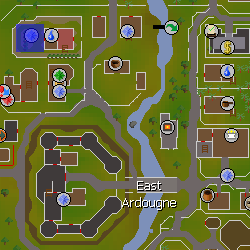 Edmond is a non-player character whose daughter was captured by mourners during the Plague City quest. Players start this quest by speaking to him, and he plays a large role in the quest's storyline.

Edmond is the father of Elena, and lives in the house north of the Flying Horse Inn in East Ardougne.

His garden contains the entrance to the sewer which is used to get in to West Ardougne in the Plague City quest. After completing the quest you are only able to go back through it from the sewer.

Edmond is the solution to the medium anagram clue: NOD MED. The answer to his challenge: How many pigeon cages are there around the back of Jerico's house? is: 3.