The robes worn by the dangerous elder druids.
Loading... 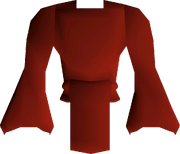 The elder chaos top is obtained as a rare drop from Elder Chaos druids. It is part of the elder chaos druid robes set, and requires level 40 in Magic to wear.