A shady and mysterious figure. 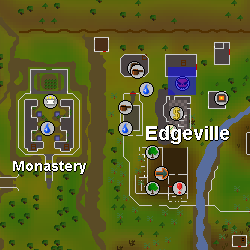 The Emblem Trader is an NPC who runs the Bounty Hunter Store. His store sells various cosmetic items, such as abyssal whip and dark bow recolours, and useful items such as Ancient Magicks teleport tablets.

He can skull the player should they ask him to, and limit potential Bounty Hunter targets to those below level 10 Wilderness only.

He also wanders the Revenant Caves in search of ancient artefacts. Players can give him ancient artefacts to receive a large amount of coins. However, he will only accept them on the current official Bounty Hunter world (either world 318 or 319, depending on the rotation). This trader cannot open the Bounty Hunter store, as he states that it is too dangerous to do so.

By taking mysterious emblems to the Emblem Trader, Bounty Hunter points are earned, with the amount of points given based on the tier of emblem given to him:

Retrieved from "https://oldschoolrunescape.fandom.com/wiki/Emblem_Trader?oldid=9049189"
Community content is available under CC-BY-SA unless otherwise noted.