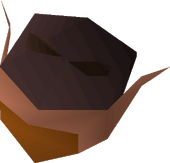 An ensouled tzhaar head is an item which can be dropped by TzHaar-Ket. It is used to gain Prayer experience by using the level 69 Magic spell Reanimate TzHaar from the Arceuus spellbook reviving a tzhaar with 35 hp when used on the death location, granting 1,104 prayer experience after killed. Killing the reanimated TzHaar will also grant 0.3% favour in Arceuus House.