Ents were a RuneScape random event. When a player tried to chop a tree, the tree had a chance of becoming an ent, also known as a "dancing tree" to some players. Like most random events, its purpose was to stop macro users. Since the ent could appear for each player chopping the tree, the odds of it showing up increased when woodcutting with more players. However, once it appeared, it influenced all players chopping that tree.

If the character continued chopping at the ent, the woodcutting axe became broken and useless. Once broken, a player could go to Bob's Brilliant Axes in Lumbridge to get the broken axe fixed. Bob fixed bronze, iron, and steel axes free of charge, and other woodcutting axe types (mithril and above) for a small fee. The stronger the woodcutting axe, the higher the repair cost. Alternately, the axe could be repaired in a player-owned house, reducing the cost.

To warn players that that tree was an ent, in the "Choose option" box for that tree, the "chop down - " was in yellow instead of the usual light blue colour. Additionally, ents appeared as yellow dots on the mini-map.

To avoid losing their axe head one simply had to click to move away from the tree. 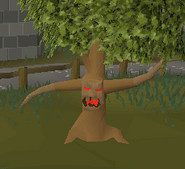 In the Wilderness revival plan, Ents are a type of monster that reside in the Wilderness. When a player succeeds in killing one, they will turn into an Ent trunk, which can be chopped for a log at random with higher-tier logs being awarded at higher Woodcutting levels.