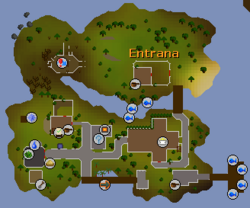 The holy island of Entrana lies southwest of Taverley. When entering Entrana, adventurers are prohibited from bringing weapons or armour with them.

Before being able to sail to Entrana, the monk will search you. You cannot take any of the following:

Silver sickles and magic secateurs are the only melee items that can be used on the island, granted that the player has at least level 18 Crafting. Since there is a furnace on the island, a silver bar and a sickle mould can be used to create a silver sickle. However, the player should only do this in their current session, for if they log off and back on after having created a weapon, the monk will spot you and remove you from the premises immediately.

Players cannot smuggle weapons or armour to Entrana by opening Treasure Trails caskets there as they cannot be received as a reward when opened on the island.

Located northwest of the port, the player can find a furnace. It is rarely used for Smithing due to the lack of rocks and Entrana's distance to a bank. However, you can find Fritz the Glassblower, who is also the Glassblowing tutor. He buys molten glass from players for 20 coins each.

All ingredients for glassblowing are found here (sand, soda ash, and a furnace), including a glassblowing pipe. You can find a spawn in the house west of the Herblore shop. There are 10 seaweed spawns on the northwestern side of the island, but you need to use the Telekinetic Grab spell to reach two of them.

There is a hops patch for the Farming skill. As usual, a tool leprechaun can be found near the patch. The player can pay Francis, and he will watch your crops for you. He also sells the following items:

Held by the High Priest, the Saradomin church is the most important building of all Entrana. If you are injured, talk to a level 5 monk and select the option "Can you heal me? I'm injured" and he will nurse you for free. From the candle stall, you can steal candles, granting 20 Thieving experience. You may fail, giving the message "A high power smites you" and inflicting 1 damage. Upstairs, the player can find an organ on which they can play a melody.

With the Treasure Trails expansion on 6 July 2016, a master clue scroll may direct the player to stand in the church and cheer while wearing a full set of Black dragonhide armour. Since armour cannot be taken onto the island, the player must have 84 Crafting (boostable) and bring a needle and enough thread and Black dragon leather to make the armour themseves in order to complete this clue. A STASH unit is provided on the north side of the church for the player to store the armour for this clue.

Frincos's Fabulous Herb Store, an Herblore shop owned by Frincos, can be found on the western side of the island.

Francos sells 50 empty vials at 2 coins each. However, there are two vial spawns in the shop.

The Law altar can be found on the northeastern side of the island.

A huge Fishing dock is located on the east side of the island. There are four fishing spots, all of which are sea bait fishing and small fishing net locations. Note that there is also a fly-fishing location located on the river. The spots are on both sides of the river directly behind the church. A fishing rod spawns in the house right before the dock, and there is a chicken farm for feathers north of the dock. There is also a range nearby for Cooking. Players can bank their fish at the bank deposit box at the Port Sarim dock.

Despite not having a bank, a Poll Booth can be found in a house on the western side of the island.

The following are found in the Entrana Dungeon: