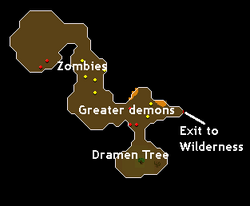 The Entrana Dungeon is found on the north-west corner of Entrana. After entering the dungeon, it is not possible to climb back up to Entrana.

It is used during the Lost City and Recipe for Disaster quests. The only exit available is a magical door, which leads to the Wilderness.

There are zombies, greater demons and during the Lost City quest, a Dramen Tree Spirit. However, armour and weapons can't be brought to the island, so the player must create their own.

Warning: Entering the cave drains the player's Prayer to almost zero. There is no way to prevent it.

The main use for this dungeon is the Dramen tree. During Lost City and when freeing Sir Amik Varze in Recipe for Disaster, the player has to cut some branches from this tree.

As the player cuts it, a level 101 Dramen Tree Spirit will appear and attack them.

You do not have to defeat the spirit again after slaying it once.

Retrieved from "https://oldschoolrunescape.fandom.com/wiki/Entrana_Dungeon?oldid=8691066"
Community content is available under CC-BY-SA unless otherwise noted.