For full lists of items worn in a slot, see this page. 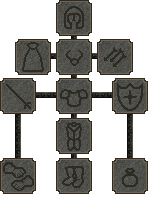 Equipment is a special type of item that can be equipped in the equipped inventory and will give a character equipment bonuses. Common types of equipment include:

Armour is generally split into three groups, which determine their stats:

Some armour tends to be effective for all three combat styles, such as Void knight equipment and the Slayer helmet (i). Some equipment has special effects when worn, such as the Serpentine helm, and the Barrows armor when worn as a set.

Capes tend to provide small defensive bonuses, and sometimes give offensive and prayer bonuses as well. Ava's devices are often used for rangers, as it will automatically pick up most ammo that would otherwise be left on the ground after being fired. The god capes allow mages to cast their respective god spell while worn. Skillcapes are some of the most widely used capes, with each providing a variety of bonuses as well as a unique perk for its respective skill.

Weapons provide most of one's offensive bonuses, and are necessary when using melee or ranged. Spells generally do not require weapons to be cast, but wielding a magical staff or wand is helpful as it provides stat bonuses, as well as the possibility of saving runes. Each of the three combat classes has a variety of weapon groups, which have particular strengths and weaknesses. The speed with which one can attack with a given weapon is often inversely related with its strength. Some weapons, such as daggers and bolts, can be poisoned or enchanted to give special effects.

Weapons can also be useful when skilling. Axes, pickaxes, and harpoons can be wielded in the main weapon slot, which saves an inventory space while sometimes providing bonuses. For example, the dragon harpoon gives a passive bonus to fishing success at harpoon fishing spots, as well as a useful special attack. Furthermore, skilling weapons can be used in combat as well (albeit generally being weaker than conventional weapons).

Jewelery includes amulets, necklaces, bracelets, and rings, worn in the neck and ring slots. Some provide stat bonuses, and some allow teleportation. Others provide passive effects in battle or while skilling.

Ammunition is used to fire bows, crossbows, and ballistae, and is held in the quiver slot. The quiver slot can also be used to equip a god blessing, which gives a small prayer bonus along with God Wars Dungeon protection. This can be useful whenever one does not need to use ranged ammo.

When items are equipped, players used to have the option to "Operate" them, regardless of them having a secondary function or not. For items that did not have a special function, the player would receive a message saying, "There is no way to operate that item," if they attempted to do so.