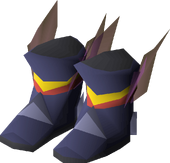 Eternal boots are boots that require level 75 Magic and Defence to wear. They currently have the highest magic attack bonus and highest magic defence of any pair of boots.

They can be created by using an eternal crystal with a pair of infinity boots, requiring level 60 in both Runecrafting and Magic (cannot be boosted). This grants the player 200 experience in both skills.