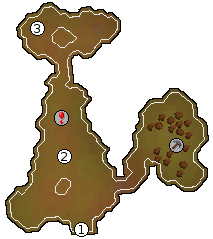 To access the lair and thus, the mine itself, players must offer a raw chicken to the Evil Chicken's shrine in northern Zanaris each visit. The lair's entrance houses several Black dragons, so to reach the mine safely, an Anti-dragon shield and possibly the Protect from Melee prayer are usually used. The black dragons will not enter the mine itself, which is found in a small chamber east of the entrance.

The mine contains a variety of minable rocks, including 4 iron, 4 coal, 3 silver, 4 gold, and 2 mithril. The bank in western Zanaris can be used to store any ore mined in the area.

This mine isn't usually crowded, but banking is a still a bit dangerous. A shark in your inventory is recommended if you are a low levelled player because the black dragons could do hefty damage to your health.