Fally, City of the White Knights 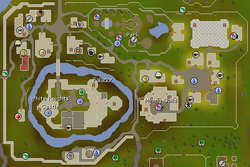 Falador is the capital of Asgarnia and a typically crowded city. It plays a key role in the RuneScape ore trade because it houses both the Mining Guild and a large mine underground. Falador was formerly a popular trading area before the release of the Grand Exchange.

Falador can be entered through the north gate, which has a road leading to Barbarian Village, and features a variety of guards; from the underground Dwarven Mine (either from the Mining Guild, or from a house in the north-eastern neighbourhood of the city); through the south gate near Port Sarim; or by Falador Teleport, a spell which requires level 37 Magic (also requiring 1 water rune, 3 air runes and 1 law rune). Members can enter from the west by using an Agility shortcut on the crumbling wall on the west side of the city, by using a mithril grapple to climb over the wall north of the east bank, or by crawling under a hole in the southern wall. The north and south gates are popular training spots for low level players hoping to level up on guards.

There are several ways to reach the city:

The east bank is in a great spot for Mining. It is only a few feet from the Mining Guild, making it useful for players mining in the guild to deposit their ores, mine more, and repeat. In a free player trading world, this bank is used mostly to buy ores, bars, and mining and smithing equipment. In member trading worlds, it is very crowded and used to buy a wide variety of items from any armour and weapons to items used in skill training. Hundreds of players used to congregate at the Falador east bank in World 2 to trade many items. The traders and merchants of World 2 have actually consciously dedicated a small section of the trading area to each trade, down to individual items. Although most items are traded commonly here, the items which have the largest market are raw materials, commodities, armour, weapons, and skill items. In the past, the World 2 trading area covers the entirety of the east bank, the area in front, around, and behind the bank, and envelops Falador Park, totalling approximately a quarter of the city's total area.

The west bank is in a great spot for smelting ores. The furnace is only a few feet away from the bank, making it quick to smelt ores, bank them, and repeat.

Falador's centre is White Knights' Castle, home of the White Knights. The castle is often crowded with players fighting the knights for good experience. The quest The Knight's Sword can be started here, and the Sir Rebral also starts the Falador Diary.

There are no altars in Falador.

Falador has its own park north of the east bank. The garden is home to moles (

), where moles can be killed for Herblore purposes (a light source is needed) and is also a key part in the Pirate's Treasure quest, as well as Sir Tiffy Cashien. The house in the east part of the garden contains a spade that slowly respawns when taken. Wyson the gardener, who can be found walking around the park, will sell one woad leaf to a player for 15 coins or 2 for 20 coins. Members can buy bagged plants here for use in the Construction skill. In the past, World 2, Falador Park was also an important trading centre.

Falador has one bar, the Rising Sun Inn (

). Here, players can purchase Asgarnian ale, wizard's mind bombs, and dwarven stouts. Each temporarily boosts a skill, or in the latter case, two skills, at the cost of temporarily lowering other skill(s). All of the beers cost three coins, and empty glasses can be returned for two coins. The bar is often vacant, though some players come here to talk or to get away from the hustle and bustle of RuneScape. This is one of the locations for the Alfred Grimhand's Barcrawl miniquest.

Previously located in Seers' Village [1], the Party Room was relocated to Falador in response of needs for the King's Ransom quest. This also allowed F2P players to access it. It is a popular place which people play host to drop parties without the interference of telegrabbing. It contains the chest and lever for drops, a bar upstairs, and a table in the centre for the dancing "Knights of the Party Room." It is now located in the north-eastern corner of the city.

South of the east bank is the popular Mining Guild. It is very close to the bank, making it a convenient guild. The guild is also attached to the Dwarven Mines. The Mining Guild requires level 60 Mining to enter (boostable).

North-east of the east bank are some stairs that lead down to the Dwarven Mines. These stairs are fairly far away, although it is the entrance to the mine that is closest to a bank.

The Motherlode Mine is a popular mine released on 24 April 2014, located south-east of the Dwarven mines. Players are able to train the Mining skill here, with access to some new training methods. A bank is also located within the Motherlode mine.

is fairly popular, though mainly consists of low level items sold by other players. It is the first building on the west side when entering through the north gate. The first floor of the general store contains the shop keeper and the shop assistant. Players can climb ladders to the top of the building on the fourth floor and look at a large portion of the city. Players can often find crafting items, woodcutting items, and smithing and mining items at this general store.

Flynn owns a small building on the west side of the general store; the mace market.

. Players can purchase uncut sapphires, uncut emeralds, uncut rubies, uncut diamonds, sapphires, emeralds, rubies, and diamonds from him. However, the gems do not restock, meaning players have to sell their gems to him, which rarely happens. Because of this, players are uncommon in Herquin's store. For rangers, in the southwest corner of Herquin's store spawns 2 bronze arrows, which are hardly collected.

North of the west bank is the hairdresser

The official ruler of Asgarnia is King Vallance, but he has recently retired from public life and no one has seen him for many years. Now, Sir Amik Varze rules in his stead.

Falador's main square located north of the White Knight's Castle has become a centre for riots, bug abuse, and other "player-made" events. Some of the events that have taken place there: