Warning: This quest will lead you into the Wilderness.

Recommended: A Camelot/Catherby Teleport to move onto the next section quickly.

To begin, talk with Dimintheis, who lives in the fenced off area of Varrock in the southeastern area next to the eastern clothing shop. He'll tell you about how without his family's crest, he can't prove his heritage and take back his estate. His sons took the crest when they left, and he doesn't know where they all are, though last he heard, Caleb was working as a chef in Catherby.

Head to Catherby. Near the middle of town (south-west of the Farming shop), usually inside the building with the sink, though he wanders outside sometimes, is Caleb. Talk to him, and he'll say his brothers and he accidentally broke the crest into three parts and each of them ended up with a piece. Luckily, he still has his piece, though he's not going to just hand it over to any passing stranger. He has an important event coming up, and he needs some fish for a special salad. Get them for him, and he'll give you the piece of the crest. What you need is shrimp, salmon, tuna, bass, and swordfish all cooked. All but the salmon can be fished right there in Catherby. The salmon can be caught in a lake just a little north of the bank in the nearby town of Seers' Village. Once you have all of that, give it to him and he'll give you the piece as promised, along with a little bit of info. He'll say that the gem trader in Al Kharid might know more about the location of Avan.

Important: Make sure he tells you about the other missing pieces. If he doesn't, the gem trader will not have the right dialogue options, and you will have to talk to Caleb once again. It is necessary to talk to Caleb again immediately after receiving the piece of the crest to ask him where the other pieces are.
Note: Low level Ironman accounts without access to the Warriors' Guild will need 46 Fishing as a requirement in order to catch a raw bass and 43 Cooking to cook it.

Items required: necklace mould, ring mould, any pickaxe, 2 cut rubies, food (optional), armour (optional) and a method to get to Falador and Ardougne (optional but will save running).

When you talk to the gem trader in Al Kharid, he will remember the person you're looking for, direct you north towards the gold rocks in a pit in the desert. Head there and talk to the man wandering around just at the entrance to the pit with a yellow cape on. This is, indeed, Avan, as he'll tell you when you ask him. He's not giving up his piece of the crest though unless you can help him win the affection of a certain lady by getting him a ring and necklace made out of perfect gold. Unfortunately, the stuff there in the desert isn't nearly good enough. He'll tell you a dwarf named Boot might know something about where to find the gold.

Make your way to Falador (alternatively, use a combat bracelet to teleport to the Edgeville Monastery, or a skills necklace to the Mining Guild) and go into Dwarven Mines. Once inside, go south-west (from the Northern Entrance) — see the map to the right. Boot should be wandering around down there, in the second alcove. Talk to him and ask him about perfect gold. He'll come up with a likely location. It's a small dungeon just between Ardougne and Witchaven. You've already been there if you've done the Slug Menace quest.

Teleport or run to Ardougne. Run east of Ardougne, just outside of the wall next to Witchhaven. Make sure to get your pickaxe, food and some gear, as there are a bunch of level 28 hobgoblins, level 53 ogres, and level 122 hellhounds that you'll have to either fight or avoid. It is possible to mine the ores without combat; however, you will probably be attacked.

Note: Protect from Melee is very useful here, since combat does not interrupt mining (despite visually interrupting the animation).

Inside the cave, to the south will be a small caged area with several hellhounds inside, along with the gold rocks you need to mine. To the north and south are two rooms with levers in and outside of them. You'll have to do a little bit of a lever puzzle here to open the gate to the hellhounds.

Now, get your rubies, your ring mould, and your necklace mould and go to any furnace that's handy (perhaps the one in Al Kharid). Smelt the ore into perfect gold bars and then use the resulting 'perfect' bars on the furnace again, selecting the usual ruby ring and and ruby necklace options to make the perfect ruby ring and perfect ruby necklace (if you just make gold jewellery, they will not be 'perfect'). Once you have the items, head back to Al Kharid and give them to Avan. As a reward, he'll give you the second piece of the crest and will tell you how to find his brother.

Items required: An antipoison potion, runes and Wizard's mind bomb/magic potion (if boosting). Combat equipment for the battle with Chronozon.

Recommended: An amulet of glory for quick access to the Edgeville Dungeon from Jolly Boar Inn.

The last brother is holed up on the 1st2nd floor[?] of the Jolly Boar Inn north-east of Varrock near the edge of the Wilderness. Bring your antipoison potion, and head up to the 1st2nd floor[?] where he is huddled in a room. Talk to him; he'll tell you he got bitten by a poisonous spider. Give him the antipoison (he'll take the entire potion, not one dose) and he'll be very grateful and be able to relay to you what happened. Apparently, he got cocky and decided he wanted to try to kill a powerful demon named Chronozon. The demon sent him away and in the process stole the last piece of the crest. If you want it back, you'll have to finish what Johnathon started.

Warning: You will be heading into the Wilderness. The chaos druids are a popular player killing spot.

Chronozon can be found near the poison spiders in the Edgeville Dungeon. You'll need to bring food, armour, an antipoison potion for the poison spiders, and enough runes to cast each elemental blast spell at least once. It will probably take more than one casting, especially if you're lower level, because if the spell just "splashes" on Chronozon, it doesn't count. You have to actually hit Chronozon with a Wind Blast, Water Blast, Earth Blast, and Fire Blast. When you hit him with all of those spells, it will weaken him and make him a little easier. Afterwards, he may be killed with any combat class.

Note: When a cast of Wind Blast, Water Blast, Earth Blast, and Fire Blast is successful in weakening Chronozon, text will appear in the chatbox stating "Chronozon weakens....".

If you don't get all of the spells to successfully hit, though, he won't die. When you finally do kill him, grab the crest piece and head out of there. It is also wise to take a one-click teleport, such as the Varrock teletab, to teleport out of the dungeon immediately following Chronozon's defeat.

Now that you have all three crest pieces, put them together to make the Family Crest and then make your way back to Varrock. Give the crest to Dimintheis who will be very, very pleased to have it back. 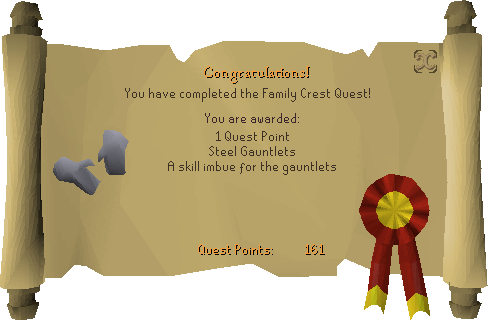