Start a Wiki
CRS
This article is about the item. For the quest, see Family Crest. 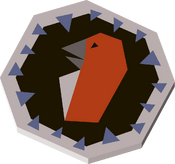 The Family crest is a quest item obtained during the Family Crest quest. It is made by combining the three crest parts given to the player by the Fitzharmon brothers, Avan, Caleb, and Johnathon, in return for performing a set of tasks for each brother.

If a player tries to put the crest back together with only two pieces, they will receive a message saying "You still need one more piece of the crest."

The completed family crest must be returned to Dimintheis Fitzharmon, the brothers' father, in Varrock to complete the quest.

Retrieved from "https://oldschoolrunescape.fandom.com/wiki/Family_crest_(item)?oldid=8691623"
Community content is available under CC-BY-SA unless otherwise noted.