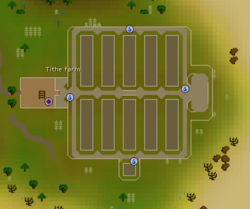 Farmer Gricoller is the owner of the Tithe Farm in the Hosidius House in Great Kourend. Gricoller is an experienced horticulturalist, as his work dealt with various methods of enriching crop production primarily through fertilisation.

Gricoller is the author of Farmer Gricoller's Farming Manual. Using the book on him results in additional dialogue. During My Arm's Big Adventure, players use his manual to help grow Goutweed on the roof of the Troll Stronghold east of the Fremennik Province.

In addition, after using Lunch by the lancalliums on Kharedst's memoirs, it can be used on Farmer Gricoller, which reveals that he was friends with the last king of Great Kourend, King Kharedst IV.

If the player uses the Farming manual on him:

If the player uses Kharedst's memoirs (with Lunch by the lancalliums included) on him: