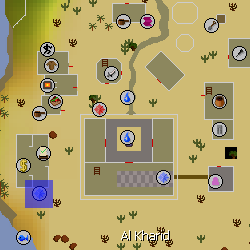 Father Reen starts Shadow of the Storm quest. During the quest, he is needed to help summon Agrith Naar again. If you do not have Silverlight with you or in bank when you start the Shadow of the Storm quest, he will return it to you for free. While he is seen at the end of the quest, he can no longer be found in-game upon its completion. Father Reen comes originally from Al Kharid. He can be found south of the Al-Kharid bank.

Retrieved from "https://oldschoolrunescape.fandom.com/wiki/Father_Reen?oldid=8690874"
Community content is available under CC-BY-SA unless otherwise noted.