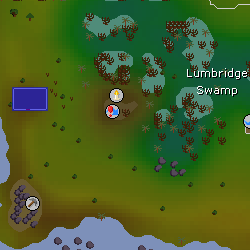 Father Urhney is an irritable priest who lives as a hermit in the Lumbridge Swamp. He has left Lumbridge to perform a full two-years meditation and retreat. Father Urhney never stops meditating.

In The Restless Ghost, Father Urhney lets it be known that Father Aereck gets himself into lots of problems, "Yeah. For example, when we were trainee priests he kept on getting stuck up bell ropes."

Retrieved from "https://oldschoolrunescape.fandom.com/wiki/Father_Urhney?oldid=8690812"
Community content is available under CC-BY-SA unless otherwise noted.