Fire giants are powerful giants that are popular for training Ranged and Slayer. They are also the strongest of the standard giants, being significantly stronger than their Ice and Moss relatives.

Fire giants are assigned by a multitude of Slayer masters, providing fairly decent experience for both combat and Slayer. They're also frequently killed by Ironman players early on due to their signature rune scimitar drop, as they are fairly easy to access with numerous safespots. Although there are many locations where cannons can be used, none of these locations are in a multicombat area.

In the Waterfall Dungeon and the Brimhaven Dungeon, they may be attacked safely with Ranged or Magic. The Waterfall Dungeon is safest place to attack them from a range because of the safespot both behind the rock in the middle of the room and in the doorway, as the giants are too large (2 spaces wide) to retaliate.

The Smoke Dungeon contains a few fire giants which are almost always empty as players are forced to bring a facemask or slayer helm to avoid smoke inhalation. There are no safespots in this location.

The Stronghold Slayer Cave has a safespot that can be used with little to no interruption from other aggressive fire giants. However, you may only kill monsters in this cave if they are currently assigned to you by a slayer master.

However, in the Catacombs of Kourend, the best safespot of all becomes available after 10 minutes and grants complete protection against any attacks. Killing these in the Catacombs of Kourend is often favoured if not planning to use a cannon (as they cannot be placed in the dungeon), as they grant higher slayer experience than normal and also drop ancient shards and dark totem pieces.

The Deep Wilderness Dungeon also contains fire giants; however, given its location deep in the Wilderness, it is usually only used for Wilderness slayer. If completing a task here, is recommended to complete the medium Wilderness Diaries to unlock a shortcut which significantly cuts travelling time and increases odds of escaping player killers.

A safespot in the Catacombs of Kourend, whilst giants are aggressive.

A safespot in the Catacombs of Kourend, after giants become unaggressive.

A safespot in the Stronghold Slayer Cave.

A safespot available in the Waterfall Dungeon, after giants become unaggressive. 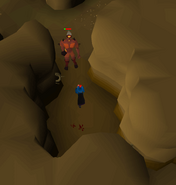 A safespot available in the Brimhaven Dungeon.

A safespot available in the Deep Wilderness Dungeon, after giants become unaggressive.

These items are dropped alongside the other items listed above.

In addition to the drops above, this monster has access to the gem drop table.

In addition to the drops above, this monster has a 1/128 chance to access the standard rare drop table.